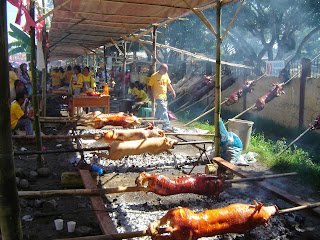 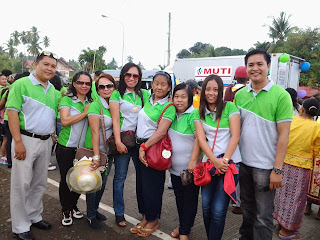 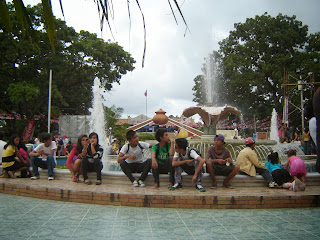 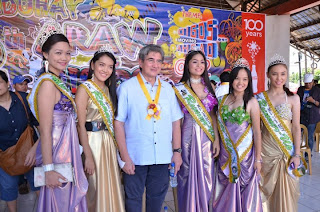 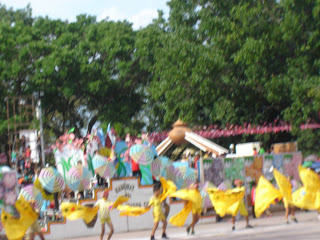 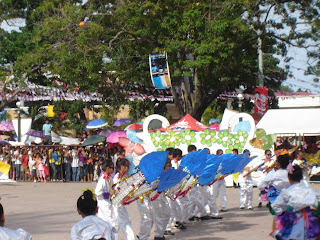 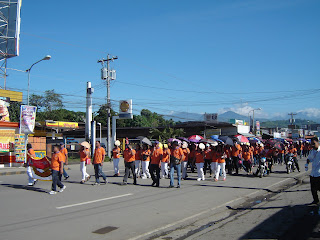 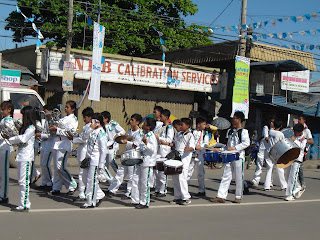 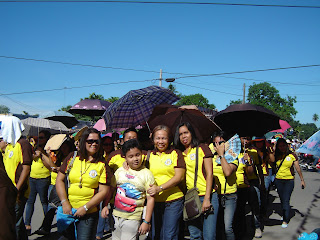 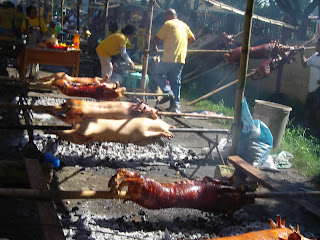 Posted by FElix Daray at 5:14 PM No comments:

Mt. Apo, the highest mountain peak in the Philippines 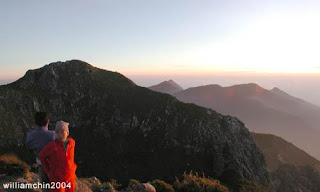 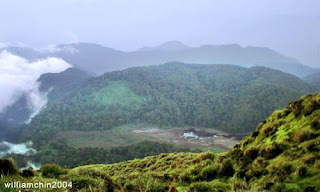 Situated in the island of Mindanao, Mt. Apo, the highest mountain in the Philippines and Southeast Asia's second highest. Known to the natives as kingdom of the mountain god, Apo Sandawa. A vast area of 72,796 hectares of mossy tropical forest, flowing rivers & streams, waterfalls, exotic flora & fauna and is home to the endagered Philippine eagle.
How to get there:
Via Digos-Peak-Kidapawan (recommended)
Prior to your climb, it is advisable to check first thru the local tourism office of any advisory prohibiting the use of certain route to the peak. Best time to travel is early morning. Best month to climb is during summer before the Holy Week, to avoid too many people crowding at the peak. At Davao City take a taxi to Ecoland Bus Terminal, find a Digos bound bus. While in Digos, Davao del Sur, ask direction for Kapatagan terminal, there you can choose to ride public van transport or (if you're daring) the "Habal-habal" or motorcycle transport. Once you're in Kapatagan, find a ride going to Sitio Marawer, be it on a motorcycle, horseback or passenger jeeps. It's wise to pay a visit to the Barangay officials there, they can help if ever you'll need reliable porters or guides. A 4x4 vehicle if available can bring you higher to Mainit otherwise you'll have to start hiking from Marawer. You can camp at Goddy-goddy on the first night. The next day find you in the open, scaling the big boulders going up to the steaming sulfur section of the volcano. Camp the 2nd night at the peak, early on the 3rd day explore the several small peaks within the summit, the sky is usually clear at this time of the day. It takes about 2-3 hours trekking down to Lake Venado from the peak where you can setup your tent for the night or proceed down Marble River or Agco.
Posted by FElix Daray at 6:08 AM No comments: 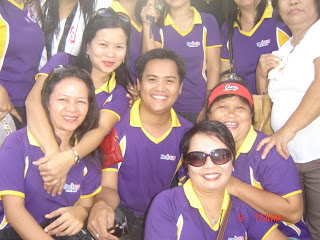 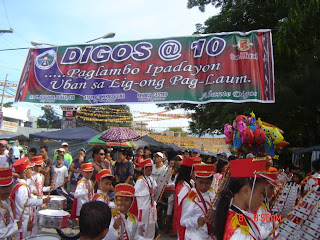 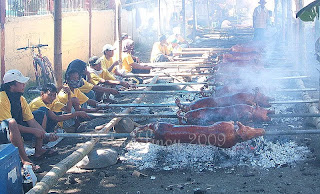 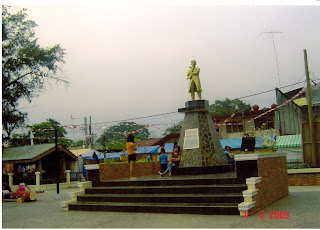 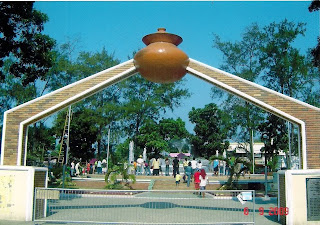 Discovering the name "DIGOS" with History

In the early days, Digos was a watercourse, a meeting place of inhabitants belonging to the Indonesian-Malay settled along the southern foothills of Mt. Apo. The Digos River meets the Davao Gulf and it is ideal for fishing and bathing.

During the Spanish Era, a group of natives carrying bows and arrows were approached by some Spaniards traversing the very fertile tracks of land in Davao. One Lopez Jaena Pacheco, a conquistador during the administration of Governor Claveria serving as the head of the group, inquired about the name of the place from the barefooted natives. Believing that the Spaniards were asking where they were bound to, the natives answered: padigos which means "to take a bath". Since then the place was identified as Digos.

As a portion of the "food bowl" of the province of Davao del Sur, other wise known as the Padada Valley, Digos lured many migrants, majority of whom came from the Visayas and Ilocos regions to settle permanently in the area. Before World War II, an enterprising American by the name of N. E. Crumb leased 1,024 hectares and transformed the place into an Abaca Plantation. This became the hub of economic activity in the locality during those days .

Through the initiation of then Congressman Apolinario Cabigon, Digos, became a regular municipality in 1949 by virtue of Presidential Executive Order No. 236, dated July 19, 1949 issued by President Elpidio Quirino. Its coverage included the barrios of Tres de Mayo, Goma Bansalan, Matanao, Darapuay and the Poblacion where the seat of government was located. Before its creation into a municipality, Digos, was a barrio of Sta. Cruz, a town 16 kilometers away. On 19 July, 1949, the town was formally inaugurated with Benito Rabor appointed as Mayor.

Digos in later years, before its conversion into a city, was regarded as the capital town of the Province of Davao del Sur, long before it gained the status of a First Class Municipality in 1993, being the center for trade, commerce and education, accruing to its strategic location at the cross point of two principal thoroughfares in the south.

In July 1998, the bid to convert into a city was moved and initiated by Hon. Mayor Arsenio A. Latasa, considering its very satisfactory qualification as required for in R.A. 7160.

House Bill No. 5672 dated November 24, 1998 of Congress authored by Hon. Congressman Douglas Ra. Cagas, led to the drafting of Republic Act 8798, converting the Municipality of Digos into a component City of Davao del Sur, which was signed by President Joseph E. Estrada on July 14, 2000 and ratified by the Digoseños on September 8, 2000.

Apparently, Digos will enter in the new era of development in the new millennium.


Source:CPDC, Digos City
Posted by FElix Daray at 5:56 AM 4 comments: 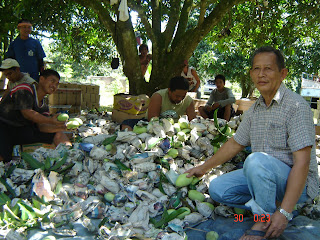 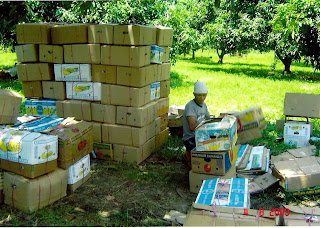 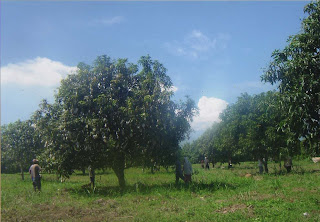 by: Felix B. Daray

San Roque is a remote barangay that ranges hilly, flat and slightly
rolling with silky loam soil. It has 438 hectares more or less or 1.53%
of the total area of Digos City.

The main source of livelihood is farming. The early settlers in 1940's
planted corn as their main staple food. In 1970, some farmers planted
sugar cane. Because of the rise and fall on the price of sugar, some
farmers shifted to mangoes production in 1982. Ten years after, mango
production started to boom because of the great demand for exports
and for local markets. The farmers got hefty profit that even tripled
compared to sugar production. With my neighboring farmers, I planted
my two hectare lot with grafted mangoes. Using the modern technology
of farming, I started inducing the plants to bear flowers at 8 years
old.

Mango fruit production became the main source of livelihood. Sugar
cane farms were intercropped with grafted mangoes. Years latter, more
and more farmers planted grafted mangoes. Based on my survey in 2005,
100% of the total land area of San Roque was fully planted with grafted
mangoes, the sweet and juicy variety, 'mango cebu'. 70% of the mango
fruits produced in Digos City came from San Roque.

Thus, San Roque is regarded the "mango country of Digos City
Posted by FElix Daray at 5:26 AM 12 comments: 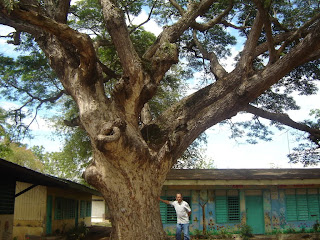 The Acasia Tree
by fdaray

Acacia) is a genus of shrubs and trees belonging to the subfamily Mimosoideae of the family Fabaceae, first described in Africa by the Swedish botanist Carolus Linnaeus in 1773. The plants tend to be thorny and pod-bearing. The name derives from ακις (akis) which is Greek for a sharp point, due to the thorns in the type-species Acacia nilotica ("Nile Acacia") from Egypt. [1]Acacias are also known as thorntrees or wattles, including the yellow-fever acacia and umbrella acacias.

This acacia tree is a unique feature of Aplaya Elementary School. It is dubbed as the oldest and biggest tree in Digos City. Its circumference is 5.28 meters or 1.68 meters in diameter. The main and small branches spread and bowed lowly that gives a circular shade. People believed that this tree is more than one and a half century old. Mrs. Felicicima Longo, the second teacher assigned in 1956 said,” this tree was already big I arrived here. Pupil used to play under the shade during noon time. Without my notice, they climbed and played hide and seek on its long leafy branches.”

Many stories were told about the acasia tree. The cutting of the tree was set aside after the construction of the building because the shade was their resting place. After the construction of the pre-fabricated school building in 1966, people living near the school saw sparkling lights on its branches and heard strumming of guitar. “It became the home of ‘engcantos, “said the folks. Mr. Tamiji, the school principal in 1990 commanded a child to cut the branches touching the roof. After cutting the branches, he suffered pain in his right arm. From that time on, nobody dared to cut the tree. Mrs. Abiera, a Grade II teacher was surprised why his pupils kept on looking at one of the big branch. She asked the child, “what are you looking up in the acasia tree?” The child answered, “my classmate is still up in the tree. “Where……?” the teacher asked. But they could not see any child. However, a certain principal planned to cut the tree. He first sought a woodcutter. But before it was cut, he asked permissions to the engcantos. He tacked an ax on the trunk and left overnight. It was found that the ax fell down. Thus, it was a bad phenomenon. The tree do not like to be cut. From that time on, the tree was left untouched even cutting the small branches. A certain David Bedico , a resident of this barangay go near to the tree and recite his ‘oracion’ asking the engcantos to heal his sick relatives. Lately this year, a certain woman removed the thick dried bark and used for firewood. Few days latter, she suffered abdominal pain and latter died. There were, many awesome stories about the acasia tree. Yet, some were untold.

The ‘engcantos’ are parts of God perfect creation. In Col. 1:16, said
“6For by him were all things created, that are in heaven, and that are in earth, visible and invisible, whether they be thrones, or dominions, or principalities, or powers: all things were created by him, and for him:” The invisible things mentioned are the world of the “the spirits, the engcantos.”

Despite of its fallen leaves that decayed and caused damaged to the nearby roofs, MR. Erlito Damo, the principal now, never plan to cut the tree, instead he says, “ Leave it. It’s a living legacy of barangay Aplaya. The tree serves the habitat of many small birds. Moreover, it helps balance our ecosystem. “

But now, it is regarded by the teachers as a friendly tree because it gives chilly-wide shade to the pupils to play during noontime. It never happened that it hurts anybody because broken dried branches fell down during night time.

Hence, this acasia tree is a landmark and identity of Aplaya Elementary School, the biggest barrio school, the home of the oldest and biggest tree in Digos City.
Posted by FElix Daray at 4:25 AM 1 comment: